There are many instances, in which I’m in discussion/debate with some knuckle dragging moron who refuses to see the point I’m getting across. So one technique I use to combat this is “movie analogy.” I usually reference a movie that is a classic, and widely known to be influential and informative to “pop culture.”

So for instance, if I’m debating someone on immigrations issues – specifically concerning Cuban Immigration and Cuban Americans v.s. the way Mexican Migration is viewed, I might reference the movie Scarface, which depicts how the United States granted political asylum to Cubano refugees, because they were fleeing what the U.S. perceived a “hostile government.” People were more easily given refugee status because the U.S. hated commies. Funny because right now, commies own most of our debt, and make all the crap people buy at Walmart, but I digress.

With regard to the recent controversies enswirled with this Central American refugee children issue, a new “movie analogy” has come to mind; Godfather II. Why Godfather II? Anyone who has seen it knows it is interlaced with the story of the “present,” interlaced with Vito Coreleone’s “past.” Specifically to Vito Corleone’s past, we see him as a child, fleeing Sicily – fleeing being murdered by the local crime boss, fleeing ALONE, to the United States. We then see little Vito Corleone go to Ellis Island, with a huge, vast wave of other immigrants from several other European Countries. 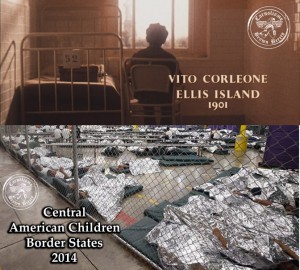 We then see how young Vito Corleone’s name had been changed from Vito Andolini by some some dumbass clerk at Ellis Island. This was written into the script, because it references what occurred to so many European immigrants who came to Ellis Island. That’s right, their names were different because of grammatical errors. Boo friggin hoo! What a horrible immigration experience.

As young Vito Corleone goes through his in processing, it is discovered he has a disease! That’s right, little Vito Corleone has small pox, and cannot be admitted into New York. They put the poor little bastard in his own room, (with an actual bed!)  in quarantine, presumably for a few months until he gets healthy, gets released and eventually becomes one of the largest crime bosses in the United States.

And yet, 90,000 little “vito corleones,” from the same continent as the United States, who are ALSO fleeing for their very lives are being called “diseased hordes,” and sleeping on concrete floors, surrounded by chainlink, just like dogs in a pound. And they too are escaping crime, and crime bosses. 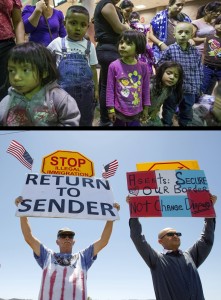 So the attitudes of anti-migration (via the Mexican border) carried by the Tea Baggers, the Minutemen, the militias, politicians, etc. are PURELY racist, xenophobic, and Euro-centric. Unless of course, they feel about Vito Corleone the same way they feel about the 90,000 kids from Central America; that he should have been given a teddy bear, and a soccer ball, and sent back to the place from which he came.