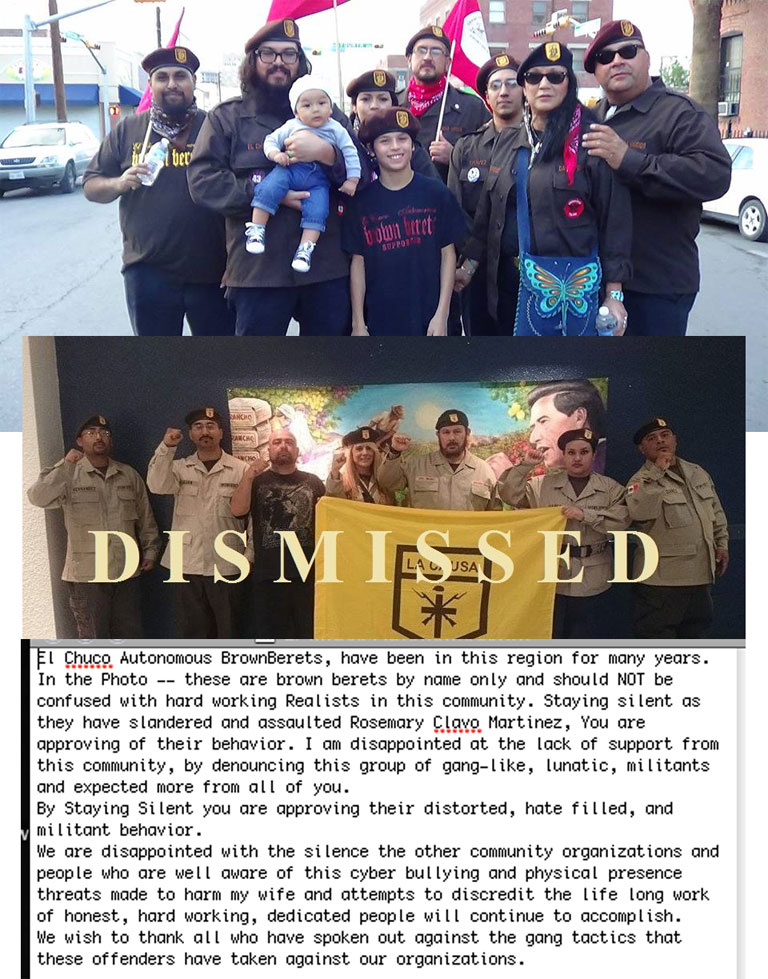 The Causa Unidos Brown Berets have had to continually deal with the rapacious BBNO, and their actively offensive motives to undermine activists en Tejas

The BBNO, in its’ newest incarnation (a post Jon Burns era) have again resurfaced, with obvious ambitions toward rapacious grab ups for BOTH recruitment and expansion. Their eminent self implosion surfaced itself in the Autumn of 2011. They enjoyed a really big hype around 2010, when their “leader” appointed Jon Burns (A.K.A. Juanito, A.K.A El Gitano) to their second in Command. His title was then Chief of Staff, and there exist screen shots of BBNO proudly hailing this. But not only was Jon Burns ousted as a sexual miscreant, (who continually calls out hits on people) but he also tainted that 2010 incarnation of the “La Causa” patch.

For those who don’t know, YES, many Brown Berets wear different patches, and YES, there does unfortunately exist some dispute on the validity of such patches.

However, one thing that can NEVER be disputed is that the Carnalismo patch has never been rife with disruption nor dispute. Carnalismo Brown Berets are far more in keeping with some tenets of the old school, “veterano” Brown Berets, in that we DON’T operate from a place of imposing our will, and that we instead operate from a sense of understanding – in fact, that is what “Carnalismo” means in the first place.

Since we don’t subordinate our fellow Chicanos with egotistical tyranny, it ALSO means that we work closely and strongly and continually with our affiliate patches – those who have humbly organized alongside us.

Such is the case, with the Causa Unidos Brown Berets from El Paso, Texas. Their initiatives, and their works are so much in alignment with us, that in many respects, they are a part of our whole. When they deal with adversity, we sense and feel it.

Since, however (or leading up to) the burial of Reies Lopez Tijerina (a Texan who for Land Grant rights en Nuevo Mexico), we have again seen an uproarious resurgence stemmed from people who lust to own a cause to which they have exhibit unethical ambitions.  With regard to Tijerina, we  WATCHED as so many greedy agencies and institutions made the passing of this defiant Tejano’s death a part of their own causes – how they were exploitative in their nature to gather own ness over the death of this man who in his life stood for justice.

And though Sr. Tijerina had converted himself to another religion for long years passed, we also saw how many people tried to step into his legacy – and to grandstand their own motives for their own perceived ill gotten gains.

Honestly, it was a sick, disgusting affair, to see so many destitute (or despot) organizations squeeze themselves in, for a chance to speak blank words into a microphone, into a camera, or onto the news. It could even be argued that such organizations, such as the BBNO, La Fey, etc. actually garnered more money or more followers for their duplicitous outcries – their false gritos.

As a NATIVE Nuevo Mexicano, whose Abuela was from Del Rio, Texas,  I felt insult coursing in my veins. Much of the embodiment of Tijerina’s work existed in my back yard, a long time ago. In his latter years, Tijerina moved back to his native Tejas, and settled into a humble life – while he was still alive, few people knew him, nor cared much about where he ended up.

But the Causa Unidos Brown Berets DID! They could tell you what his favorite food was shortly before he passed away. They could tell you where he sought solace, in contrast to  a lot of grandiose organizations who so hungrily salivated over owning his legacy. Few people would know his humble road as he sadly departed us all. But the Causa Unidos Brown Berets were there when few paid attention to him.

This “ambulance chasing” attorney out of El Paso has been hastily “promoted,” and emboldened by Jeronimo Blanco, to lead and direct the new incarnate of the BBNO. The hasty “promotions” are reminiscent of the 2010 BBNO, when Burns had been endowed as second in command. Burns only lasted a little over a year.  What credibility lies with a man who barely became a Brown Beret when he was middle-aged, and why he is given so much credence?

The current incarnate of the BBNO have distinctly sought to be rapacious, and to have ownership of the Brown Beret persona. Their enthusiasm shows, since they copyrighted the “La Causa” patch. And for all the flagrantly reckless statements they make on their website, it is VERY ironic that the BBNO used the same gabacho laws they claim to be against in order to copyright the “La Causa” patch – a patch and symbol that has been in use before any of their existent leadership became Brown Berets. None of the “men” who poise themselves as leaders are even originators of the “La Causa” patch. Still, they continually “troll” on facebook, to deceive the public. They flagrantly disrespect other Brown Berets, of other patches, and they try to harass other Brown Berets with “legaleaze,” and false cease and desist threats.

This is the precipice of the problem, as it exists for Chicano activists today; the ego-stroking characters, conjuring fake adversaries, spreading libel, slander, and harassment, and implementing deception to cause unrest and disruption.

To those poor saps who joined the BBNO, drank the koolaide, bought those silly khakis, the canteen belt y todo; Carnalismo feels sorry for you. We have no ambitions to recruit “puppies”, who subject themselves to be lead on a leash. We are comprised ONLY of leaders, NOT followers. And we only encourage independent thought. We challenge one another, and we UNDERSTAND one another. This is why we hold strong – BOTH with our chapters, and our affiliates.

We keep our Movida clean from trolls, never-do-wells, sex offenders, and ego-stroking sycophants. That is what we have always done, and that is what we continually do. And most importantly, we do it from a place of CARNALISMO; compassion, understanding, carino, and shared conciseness – actions which cannot be written in words…