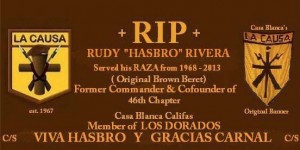 As of this writing I have just finished burying my grandpa earlier this afternoon. With mucho siento, we the Carnalismo Brown Berets also mourn the loss of a Brown Beret hero, a veterano to which we regard as heroic and tenacious.
Hasbro, was among the few non-Carnalismo Brown Berets who was given an honorary patch to wear. Our condolences go out to the Rivera family.
That being said, there has been some confusion surrounding a YouTube video that was posted recently, consisting of video footage of Hasbro heroically taking swings at National Socialist Movement members at a riverside protest. The video is interlaced with audio of Jon (juanito) Burns boasting about overseeing Hasbro’s expulsion from the Brown Beret National Organization. For those who may not be enlightened, Jon Burns was himself voted out of the BBNO, due to allegations of sexual harassment and misconduct. Though he was appointed second in command of the BBNO, his peers voted for his expulsion after very real evidence was revealed of his misconduct.

It has been brought to the attention of the Carnalismo, though NOT verified by direct contact that the Rivera family that they have taken offense to the video. To that end, again after having just buried my grandpa today, I and Carmalismo cannot further express our sympathies and condolences.

The following and the former ARE official statements as agreed upon by the Carnalismo. Chiefly, the video was taken down. Firstly, the intent of the video was NOT to villify Hasbro by any stretch or exaggeration. The initiative of the video was actually a protectionist measure, meant to show the deceptive nature of Jon “Juanito /El Gitano” Burns.
I can fully attest to seeing Burns using a Brown Beret passing as an opportunity to deceive the family of the departed. I have buried two soldados whose passing he has used to embolden his image. The video was a measure to alert the Rivera family as well as other Brown Berets that Burns himself spoke Ill of Hasbro some two years ago, only to use his death to try to gain a foothold into whatever regurgitation of the BBNO he obliterated may exist today.

To the family of Hasbro we express our condolences, and observe his heroic deeds. To the corrupt, deceptive, morally bankrupt individuals such as Burns who continue to cast threats, we assure the public and the Brown Beret community that we will not work with nor observe such corrupt individuals. Even as of this writing, threats have been cast on some of us, not from the minutemen, the KKK, the NSM or any white supremist groups. Threats are being cast by men identifying themselves as Brown Berets.