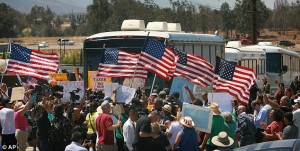 Earlier this week, on an Oracle, Arizona Highway a bus full of school kids en route to summer camp was stopped by a bunch of peckerwood vigilantes. These peckerwood vigilantes have pledged to block buses transporting the influx of minor migrants from Central America. After these knuckle-dragging morons realized the bus they stopped was carrying children from a local school district in Marana, they waved the bus through, and let it pass. The bus was on it’s way to a YMCA summer camp.

The protests from these Tea Bagging, militia-types began earlier this month, in Murrieta, California and has spread to other border states. Scenarios like these can become dangerous situations, when a busload of school kids cannot travel freely, there is a problem.

In both towns, however, these morons have only numbered in the dozens – NOT hundreds, as right-wing, corporate news is trying to misportray. Many officials have also helped in pumping up fear surrounding these migrant children.

What is ironic is that these militia morons have made such an issue of showing presence in “guarding the border” after hearing about mere children entering the United States. They must feel emboldened since they’re standing opposed to kids, instead of squaring up toe-to-toe with grown ups. They ought to pick on someone their own size.

The Tea Baggers have announce over 160 events protesting the arrival of these migrant children, who are fleeing deplorable conditions for their own chances at survival.