In recent months, a FAKE PROFILE of malicious intent has emerged on Facebook. Initially, the FAKE PROFILE was named after an actual Carnalismo Brown Beret, while displaying a photo of another real person. The profile picture of this real person is a “veterano” Brown Beret, who continues his work in El Paso, Texas as an activist. His work has been written about and published. 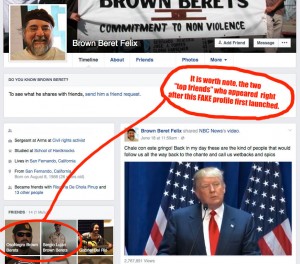 Please note; the two “top friends of this FAKE PROFILE

The profile picture is from an actual published article in the El Paso Times, and other numerous web and print publications, and is accredited to Raymundo Aguirre from Borderzine. 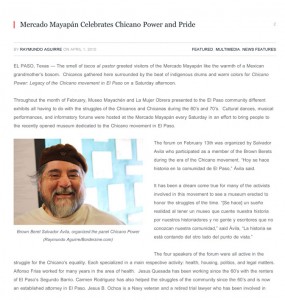 The original article from where the profile picture was nabbed

It has been observed that this FAKE PROFILE has been amassing Facebook friends, and posting bizarre diatribes about Donald Trump, etc. It is obvious that the originators of this fake profile have duplicitous, malicious intentions toward the Carnalismo Brown Berets, as well as other activists.

It is also worth noting that when the profile had initially launched, the two “top friends” are both members of the BBNO, in El Paso. This could actually indicate that one of those two Facebook “friends” actually launched the profile themselves in an attempt to cause disruption and confusion amidst the Brown Beret Community, and other activists/organizations.

We caution anyone who has been swindled into being “Facebook friends” with this profile, as it is NOT real, and obviously has pointed agendas and bad intentions. It is very sad that the individual who launched this fake profile in an obvious attack on the Carnalismo Brown Berets actually used the picture of a legitimate, humble activist who himself may NOT even be aware that his likeness is being used by malicious persons.

The Borderzine article referencing the activist can be found at:
http://borderzine.com/2010/04/mercado-mayapan-celebrates-chicano-power-and-pride/