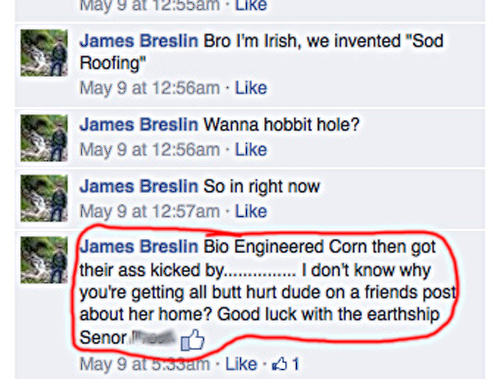 Screencap of a facebook conversation that turned racial real quick

This Facebook image encapsulates the new tone of white supremacy in this country. This belief seems to be an underlying one which is held by a lot of Anglo people: that everything in this country was rightfully taken because the white Europeans prevailed by conquering over all the others. I’m sure this young white guy doesn’t consider himself to be a racist. In fact, he’s probably one of those people who says “I’m not racist! I have black friends.”

However if his underlying belief is that his race “kicked the asses” of the others, and therefore was righteous in creating the climate of colonization that many minorities grapple with today, then without question he is still just a racist.
I have continually encountered this mindset with many a white person. Many of them outwardly nice, easy going people who would consider themselves friendly, considerate, decent people.
But I have arrived at the understanding with most (if not every) white people I’ve come into better acquaintance with hold this underlying belief.

And how could they not? In public school, the histories they teach say very little about what the Europeans did on this continent. They touch briefly on it, but not in any way that might make the white kids too icky. Furthermore, white culture is represented in every facet of American life, and is in fact the vision of seeing everyone become “Americanized.” Their concept of this seem to limit the inclusion of other heritages, ethnicities and cultures while bolstering one culture, one way of doing things. One belief system, etc.

Prime Minister of New Mexico’s Journal May 6, 2014:
It’s like a bunch of cockroaches-surfacing in the dark. You shine a light on them and they scatter, but they always come out in the darkness. I equate racism in America in much the same way. These filthy, stinking cowards who largely kept their views to themselves, because the rest of the decent people had shamed them into doing so.
Everyone has a right to be racist-no one is trying to suppress that right, nor should we be. But when we see the attitudes shift toward implementing oppression through legislation and policy, well that is another matter.
It may be a matter of semantics, but I’m not sure I’d call these agendas of oppression racism. They’re far more subtle. I’d call them classism, and ethnicism- still race based in ideologies, but so subtle they’re unspoken amongst those who support them.
This cowled, shielded attitude has shaped racism today. Since conventional racists had been shamed away from flagrantly casting racial epithets, they learned to take dog whistle queues in the media and amongst cohorts to prop up the same consensus.
Worse yet, while listening for these dog whistle queues, the racists have also learned to pull what I call “reverse, reverse racism,” which is for them to pull some racist sh*t, and then accuse those calling them out on it as “race baiters.”
As identifiers of oppression and racism we must NEVER be afraid of calling something as it is. Don’t ever hesitate.

I recall being at an Occupy Protest one time when someone volunteering for the Ron Paul presidential campaign showed up. He was real aggressive and wouldn’t shut the hell about Ron Paul, while passing out palm cards. The protesters continued to tolerate him, and make intelligent arguments with him. But I couldn’t stand this idiot, so I blurted out, above the crowd “Ron Paul is a fuckin’ racist! Get the fuck out of my face with your Dr. Ron Paul!”
All the protesters laughed at him. I was in full Brown Beret uniform, and I was ready to handle the exchange any way he wanted. I didn’t call this poor dude a racist, but I did point out that the man he was supporting and trying to cram down our throats IS a racist. It ended all discussion right there, and the dude quietly walked off, with a bunch of protesters cheering. Confronting racism is a beautiful thing.